Addressing Dalit women’s human rights and taking action on caste and gender based violence on Dalit women is at the core of JMS’ mission. With this vision JMS was initiated as a collective of Dalit women in 1999. 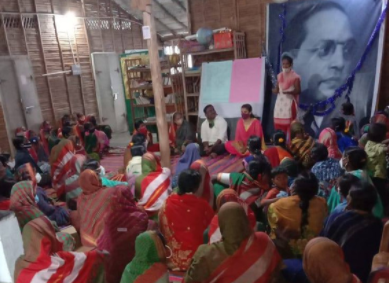 The 1st phase extends through the formative years of JMS, viz. 1999-2005. The goal of the massive ground level mobilisation was to ‘organise’ Dalit women and ‘conscientise’ them in order to ‘resist’ the systemic discrimination and exploitation that they faced. Organising women on the axis of class identity, i.e. as agricultural labourers formed a key organising strategy. Agricultural labour was the primary work that the landless communities engaged in. In the feudal setting of Raichur, where most of the Dalits were absolutely landless, the wages in the peak season of work (about 3 to 4 months a year depending on the rain and other factors) was about 80 rupees per day and in the lean season (about 4 months) would be Rs.20/- for women and Rs.30/- for men. People did not have any work in the rest of the months. The zamindars and big farmers resorted to rampant mechanisation of harvesting during this time even as drought was hovering over labourer’s lives. The struggles of people were multiple in this phase that included – struggle for the payment of pending wages, equal wages, stopping mechanisation in harvesting, demanding drought relief work and its effective implementation, fight against corruption in these schemes. JMS also undertook land-development programme of the lands of Dalits (1 to 1.5 acre) lying fallow for decades in a village (Devipura) with the government funds. Read more

During the 2nd phase, 12 women community leaders started taking leadership of JMS as co-conveners on a full-time basis, ushering in a leadership change. During this phase, with the prolonged drought in Raichur, there was massive outmigration to cities. Though with the short supply of labour, wages had gone up slightly, the net wage-days of work had drastically reduced. Big farmers had started employing machineries in the agricultural work which further displaced labour. However, during this phase, National Rural Employment Guarantee Scheme was launched in 2005-06, and Raichur was one of the 100 districts that was short-listed for piloting the scheme. JMS fully got involved in mobilising communities for this. Subsequently, in 2007, NREGS was enacted as a law entitling each household to 100 days of work. With the massive inflow of money to each Gram Panchayats (GP), the corruption in GPs and elected members skyrocketed who saw it as an opportunity to siphon off funds. Simlarly, the landlords who exerted substantial clout in the local politics and business, with the machineries that they had bought with the surplus, such as tractors, JCB machines saw it as an opportunity, to get their share of pie from the government funds. JMS had to simultaneously fight the corrupt officials, elected representatives and landlords who employed machinery to pocket the NREGA works. During this phase, JMS undertook (1) land-development of 58 small farmers in 4 villages (Kharabdinni, Jagir Pannur, Pothnal and Dothrabandi) – in collabortion with Sir Dorabji Tata Trust; (2) massive mobilisation of 5000 households for setting a model in NREGA implementation - in collabortion with Sir Dorabji Tata Trust; (3) Mobilising 1000 agricultural labourers for skilling them with production of value-added products such as vermi-compost and xxxxx to promote organic agriculture. It enhanced their livelihood skills and capacities. This was done in collaboration with Traidcraft which advocated for fair trade. Read more

The third phase extended between 2012-2017 amidst massive socio-political changes in the country. By this time, number of people from the villages had developed their linkages with the cities for seasonal or long-tenure migrations and implementation of NREGA had become a norm on a regular basis. During this phase, the children of JMS women leades had grown up and some of them opted out of this strenuous work, owing to age and domestic compulsions. The focus on right to work had taken a lower priority in the organisation during this time, and work on right to health, rights of senior citizens, right to food and nutrition was prominent. However, in all the Gram Panchayats, in collaboration with others, getting job cards, effective and non-corrupt implementation of NREGA continued. JMS also collaborated with several peole’s collectives at the state and national levels to high light the issues of non-implementation of NREGA and to move the government machinery to provide work during the lean seasons of agricultural work. The fight against employing machineries in NREGA works and diverting NREGA funds to other purposes continued. Read more

The current phase of JMS, starting from 2018, marks a further rejuveration in the membership base of JMS which had dwindled in the thrid phase owing to several reasons. Though there was migration and wages had gone up, NREGA still continued to be the steady life-line for people. During this phase JMS took a strategic decision to expand the membership base beyond the Dalit community to include other daily wage based-landless communities by organising them into labour groups in villages. JMS has currently expanded its membership to 3500 households and its intervention in 75 villages in 30 Gram Panchayats, stretching across 4 blocks. Two new blocks have been carved out in Raichur district and some of the villages of JMS constituency are now in Sirwar and Maski talukas (blocks). This makes the presence of JMS now live in 4 of the 7 blocks in Raichur. Gaining from the experience of almost 20 years, the JMS leaders are at the forefront to navigating through the maze of government bureaucracy. They have gained skills in using smart-phones, social media such as whatsapp and have been aided by others in using emails to document and communicate with authorities. The digitisation of accounts, direct payment, linkage with adhar cards has given a new twist to corruption which workers cannot see or understand. Wrong bank account numbers are attached to the adhar cards and job cards of workers which divert funds to othes. JMS is at the forefront of getting justice in work to each and everyone. During this phase, JMS is focusing on the gender-lens in NREGA, viz. providing women-friendly works, equal wages for women, women-child friendly work conditions, sanitation etc. This is a work in progress, along with the massive amount of work undertaken and crores of rupees that JMS facilitated reach each and every household. Read more